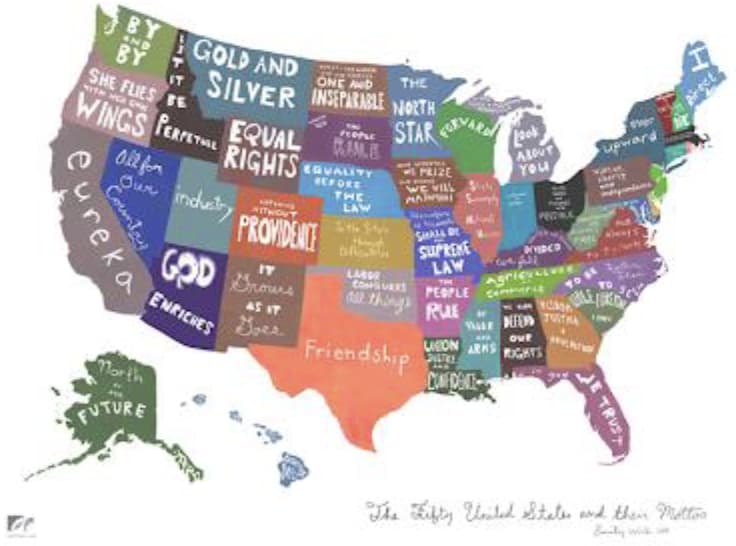 “The US goes by the motto In God We Trust(but only since 1956, when it replaced the ‘unofficial’ motto,E pluribus unum). A motto (from the Italian word for pledge, plural mottos or mottoes) describes a quality or intention that a group of people aim to live up to – a mission statement of sorts. As such, America’s newer motto has invited more controversy than the older one, since it seems to run counter to the principle of separation of church and state. Its introduction did seem to make sense at the time, what with the Cold War against those godless communists.

As demonstrated on this map, the 50 states making up the US each have their own motto too. The two-and-a-half score state mottos display a wide variety, of quotations, languages and underlying messages. English is the favourite language, but not even by half: only 24 state mottos are originally in English; Latin, once the language for all solemn occasions (and not just exorcisms), accounts for 20. Two mottos are in native languages, and French, Spanish, Italian and Greek account for one each. The system of checks and balances seems to work for mottos too: if the national motto is overtly religious, then only six of the state ones refer to God, either directly or obliquely. Most deal with secular rights, and the readiness to defend them. The Bible is tied with Cicero as the source for the most mottos (three), while classical literature has proven a particularly fertile breeding ground for inspirational quotes (mottos originate with Lucretius, Aesop, Virgil, Brutus, and Archimedes).”

I find this map and explanation so interesting. I love the idea that a motto is a form of a mission statement. And when I look at the mottoes of the 50 United States, I get really curious about the essence of the chosen words and what a State does to truly live that essence. I wonder, what is in the essence of “Eureka” that thrives in California today? Wyoming is incredible: What is the essence of “Equal Rights” that lives in Wyoming today? “May the People Rule” is the mission statement of Arkansas and “I Direct” is the motto of Maine; what’s it like to live in a State where the essence of these words is ever-present? Or is it?

The thing about a motto, or a mission statement, is that the words have to mean something. They have to conjure up a feeling, a sensation. They have to light a fire of possibility and purpose. A mission statement has to have enough “oomph” to it where you want to do everything in your power to achieve it, live it, grow it, and work for it.