We Can Do Better

This fundraising campaign called BuyLife, for the organization calling itself “Keep a Child Alive,” leaves me cold! Everything about it strategically and tactically is just wrong. Wrong! It’s not clever, edgy, ironic. It’s just bad.

A simple breakdown of the campaign: A wide range of celebrity-type people will cease all fan contact (being promoted as a “sacrifice”) through their social networks from December 1, 2010 until $1 million is raised (collectively) for the charity. From the campaign website: How many real lives can be saved by sacrificing a few digital ones? Millions…

Starting December 1 – World AIDS Day – the world’s most-followed celebrity Tweeters are sacrificing their digital lives to help save millions of real lives affected by HIV/AIDS in Africa and India.
That means no more Twitter or Facebook updates from any of them. No more knowing where they are, what they had for dinner, or what interesting things are happening in their lives. From here on out, they’re dead. Kaput. Finished.
But they don’t have to die in vain. And they don’t have to stay dead for long. Just watch their Last Tweet and Testaments and buy their lives back.
Every single dollar helps Keep a Child Alive and fight this terrible disease. And when $1,000,000 is reached, everyone will be back online and tweeting in no time
You can even join the fight yourself by sacrificing your own digital life. If Khloe and Kim can live without Twitter for a few days, maybe you can too.
Together, with a little digital sacrifice on our parts, we can give millions of real people the care, love and hope they deserve.
We can give them life – the one thing none of us can live without.

As evidenced in this campaign, the public has an incentive NOT to give: These celebrities will be silent until the $1 million dollar goal is reached. To the general public weary of the over-saturated celebrity-driven culture, this is the best money people do not have to give. 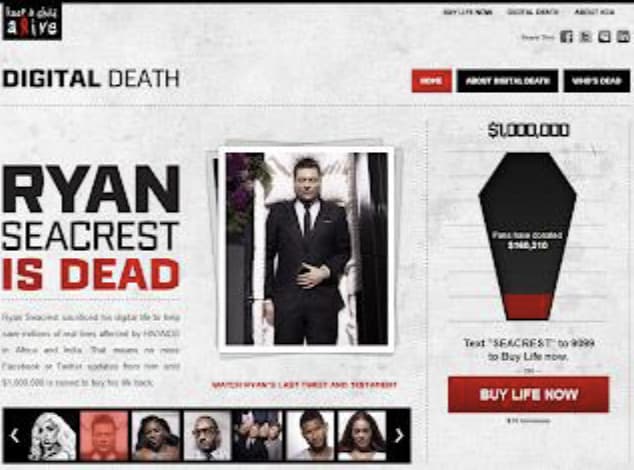 The focus of the campaign is on what the donor willnotget (your favorite celebrity Tweet, for example) and says nothing specific about what the donated dollars will do for the charity and the people the charity serves. Donors do not give when threatened with deprivation (No Tweets for You!), rather donors give when convinced their gifts make a difference by credible organizations and they feel valued for making the gift. Donors don’t want to give to dead celebrities; they want to give to living people with real needs.

The ad campaign depicting living “dead” celebrities in glammed-up casket shots is just creepy. The photos are not attractive, nor do they tell a story about the cause or the charity benefiting from this campaign. They really aren’t all that provocative, or shocking. They aren’t even disturbing. They are just creepy. 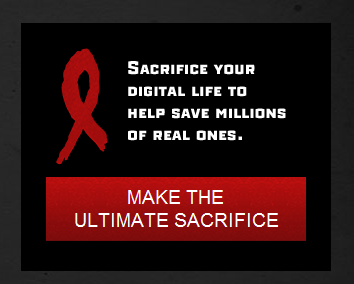 Since when is “sacrificing” digital use the “ultimate sacrifice”?
The campaign makes light of death, dying, sacrificing, giving, and buying. I believe in an appropriate context even darkness can be light, but not here. The campaign asks: “If Khloe and Kim can live without Twitter for a few days, maybe you can too.” In the context of this ad campaign, is this levity really compelling? Appropriate? Funny?

The online medium for giving has been grossly underutilized! And most celebrities underutilize the value of their celebrity for good. What would be possible for children with AIDS if these celebrities used the breadth of their virtual social networks and the power of their celebrity to reach their followers with a message stating why they sincerely believe in the cause, why they actively support this particular organization, why they are making a meaningful financial contribution to the charity, and then urgently inviting their fans to participate. How many children will die from AIDS while these “dead” celebrities participate in this empty gimmick?

Message for leaders of non-profit organizations:
I have seen some bad fundraising moments in the non-profit sector; this is a new low!

We can do better than this!

P.S. World AIDS Day, December 1st of any given year, was designed to be a solemn, reflective day about the millions of deaths so far, the tens of millions of people infected with HIV today and filled with a global education and prevention messaging. When did the World AIDS Day “brand” become so watered down to now include the salutation “Happy World AIDS Day”? Really?